From time to time I get questions about how I made a certain picture and whether I use Photoshop and so on, and I’m always happy to explain.  I was asked this question several times last week at the book signing for my new book:  “Creative Spaces: Inside Great Falls Studios,” so I thought I’d take an image from the book and walk you through the decisions I made as I put the image together.   Before I dive in, I should let you know my bias.  I do use Photoshop for many things, but my strong preference is to capture the image in the camera the way I want it to look.  I’d much rather spend time shooting than sitting at the computer fixing mistakes I made in the field.

Here is the first image in the book, Laura Nichols in her studio Pig Pen Pottery at Hidden Springs Farm in Great Falls Virginia.

There were a number of challenges to overcome in creating this image and I’d like to walk you through it just as I did on the day, so here we go: 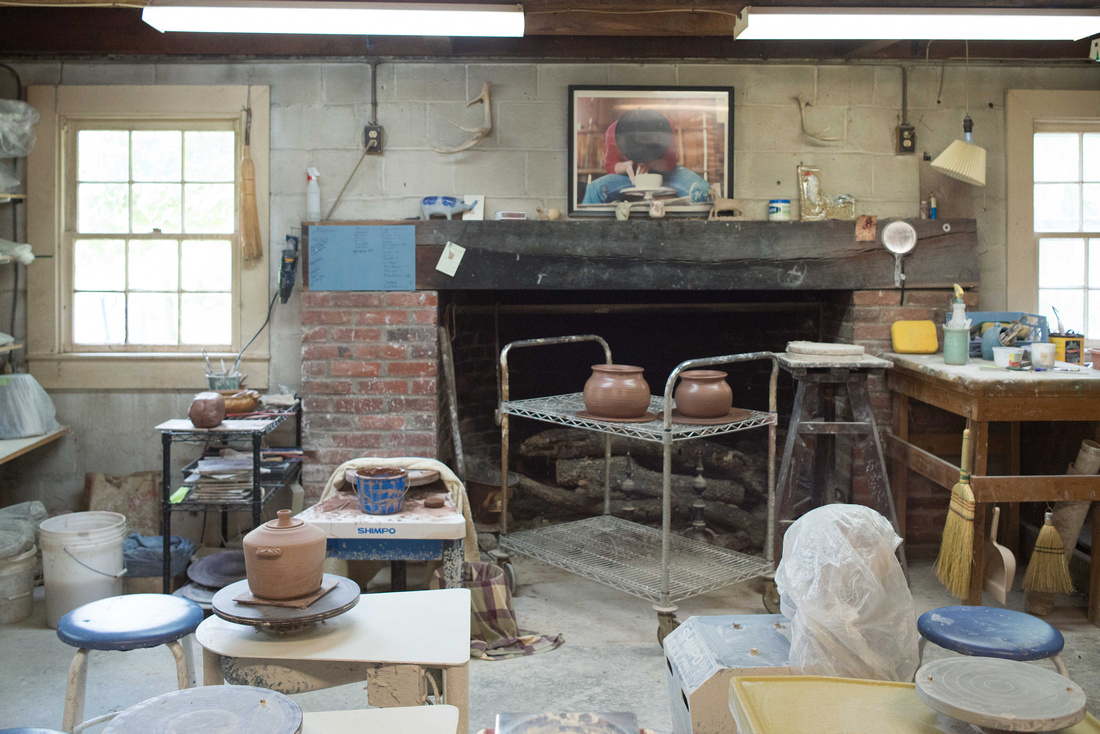 I’m not worried about the awful lighting right now – I’ll get to that after I complete the composition.  There is no point is spending time lighting things that may not even be in the frame.

I setup directly parallel to the fireplace so that the plane of the images acts as an invisible fourth wall between the scene and the viewer.  This position also mostly eliminates the distortion that is caused by the use of a wide angle lens.  It also has the advantage of exploiting several classical compositional elements which give the final image balance and energy:

Rule of thirds.  The rule of thirds is a compositional guideline that suggests that composing an image with the subject off center, about a third of the way in from an edge, provides more visual tension and interest than composing an image with the subject in the center.  Laura will be seated at her wheel in front of the brick fireplace surround – approximately 1/3 into the image from the left.  In addition the fireplace provides a strong horizontal line 1/3 down from the top of the image.

Leading lines.  A leading line draws your eye towards a subject.  The line of student pottery wheels, again about 1/3 in from the left, leads your eye directly to the main subject.

Triangles – are strong classical compositional elements.   In the final image, Laura is at the vertex of a triangle formed by bottom of the image, the leading line of tables, and the edge of the cart.  There are other triangular elements that reinforce the compositional structure of the frame.

With the composition complete I begin looking for ways to improve the image.

I’m fortunate that the pottery studio is visually interesting to begin with – all it needs is a little attention to detail to go from interesting to compelling.  The fireplace is the most significant architectural feature of the studio and the blackened wooden mantle is a visual treat.   Since we are shooting in the middle of summer, and the birds are nesting in the chimney, a fire is out of the question.  Without a fire the fireplace forms a kind of black hole in the middle of the picture.  So I put a cart in front of it.   Also, the mantle is cluttered with spray bottles and broken pottery and a white note card taped right above where Laura will be sitting.   A brief chat with Laura and the clutter is replaced by pieces of finished work that add a little color to the scene and remind you that you are looking at an artist’s creative space.

With the staging complete it is now time to think about lighting.

The first thing I notice is that with the room properly exposed the exterior seen through the windows is completely blown out.  Frankly, it looks as if someone set off an atom bomb right outside the studio.  This is not unexpected, while the human eye can easily see tones from very bright to very dark at the same time, all cameras have a more limited “dynamic range.” In a scene like this, with bright sunshine outside the window, and a relatively dark interior, the camera simply can’t capture it all. So the first thing to do is get the windows under control.   To do that, I adjust the exposure for outside and snap off another frame.

One problem solved and a couple of new ones created.  The view outside the windows looks nice, but the room has been cast in near total darkness, except for the annoying fluorescent fixtures at the top of the frame.   I take the easy one first and adjust the composition so that the fluorescent lights are out of the frame.

Now it’s time to add some light.  This is where off camera flash is really helpful – almost mandatory.  An on camera flash will result in nasty looking reflections and glare in the windows and in the glass frame of the picture on the mantle.  In addition, on camera flash is almost never a flattering way to light a person.   So, I put one external flash about three feet to the left of the camera and one about three feet to the right.  Both flashes are mounted on stands and shooting through white umbrellas to diffuse the light and make it softer.  They are pointed at about forty five degrees into the scene which guarantees that that the camera will not see any reflection in the windows or glass picture frame.   With the flashes in place, Laura sits down and starts working and I take another test shot. 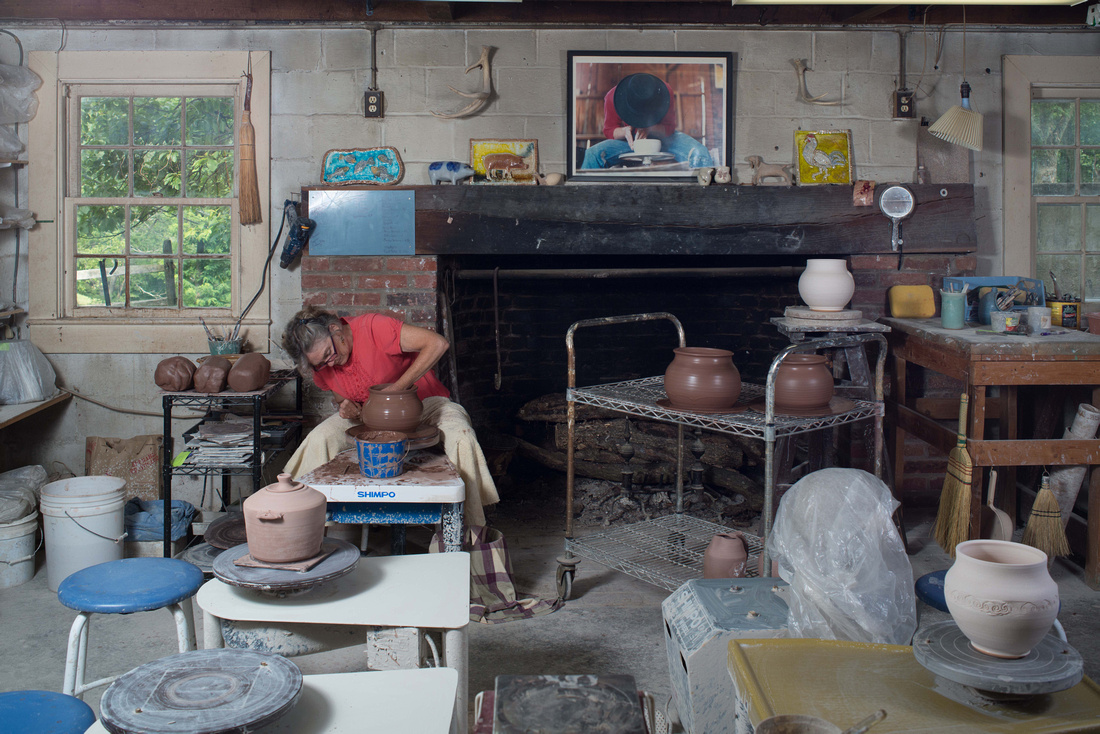 It’s starting to look pretty good.  Laura looks terrific and the pot she is working picks up nice highlights from the flashes.   The room looks good too - the light is even and there are no harsh shadows or distracting reflections.   The fireplace still looks like a black hole so I’ll have to do something about that.   The white pot on the pedestal is distracting and the pot with the plastic bag over it makes the studio look cluttered.  With Laura’s help I swap out the white pot for one of the new red clay ones, and uncover the pot on the student’s wheel.   Since I’m not able to light a fire, I do the second best thing.  I put a flash on a small stand, cover it with an orange gel and set it in the back of the fireplace and snap off another frame. 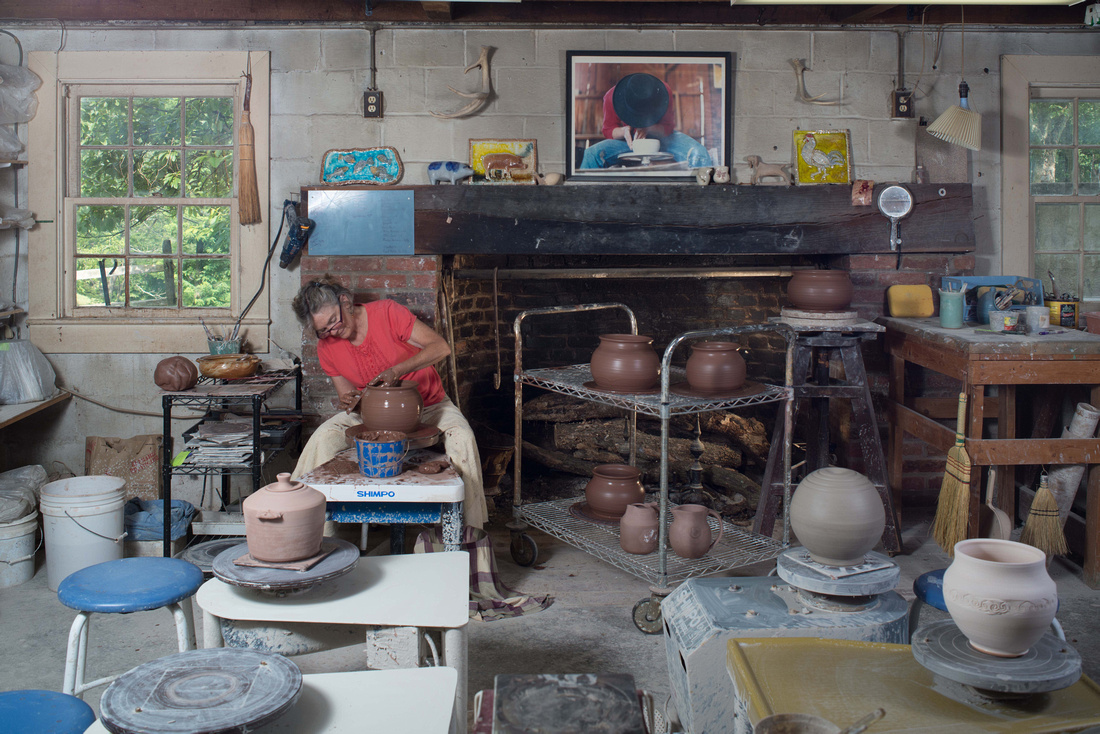 Ok, now we’re cooking with gas!   While Laura takes a break I make a few minor adjustments to the light levels. I reposition the light on the left to eliminate the glare in the blue plexiglass above Laura’s head, and I snap off a quick test frame. 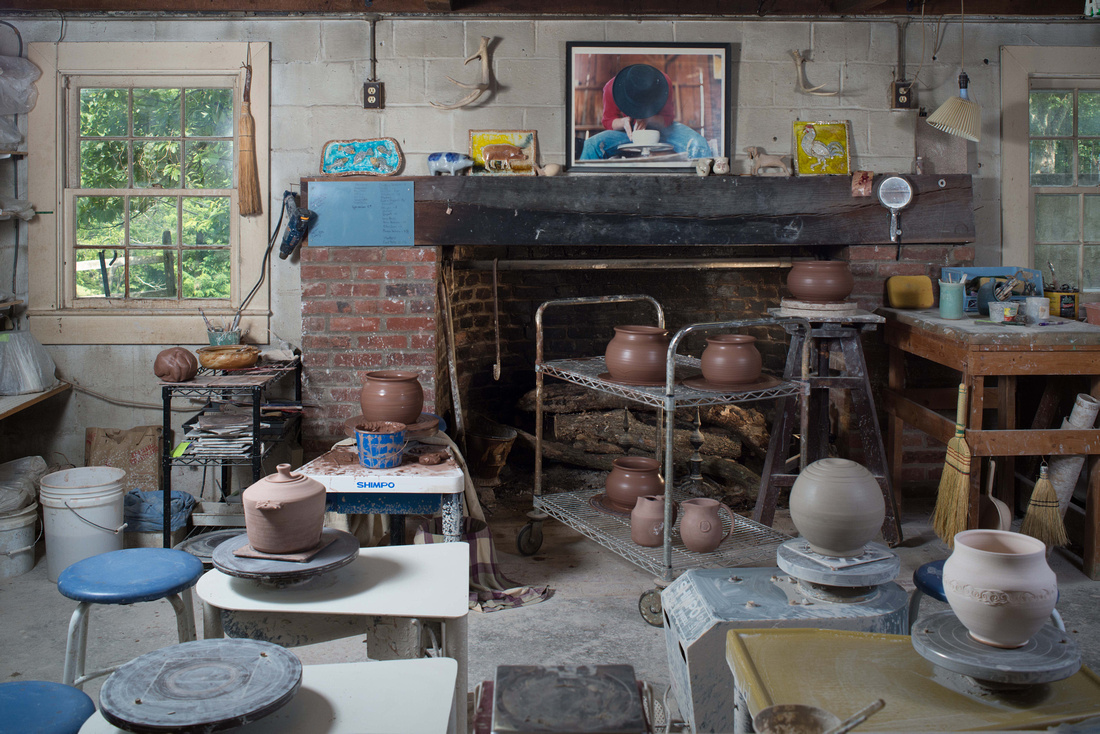 Now I’m happy with the composition, staging and lighting.  Laura sits down and starts to work. I don’t even look through the view finder now, I just snap off frames while Laura works and we chat, waiting for the right moment.  When the moment arrives I know I have it in the can since I’ve already taken care of all the problems.

The total elapsed time between the first image and the last: 52 minutes.   The total time in post-production, using Adobe Lightroom was about 10 minutes - adjusting contrast and minor burning and dodging, followed by sharpening, and I never even opened the image in Photoshop.

There you have it.  I hope this was helpful.   Please leave any questions in the comments.

Warren Colledge(non-registered)
Thanks for taking the time to tell how you took such a great image. Your description of composition was very intuitive and as I looked at your images I could see exactly what you meant. The lighting segment was clearly explained yet you used limited resources. From your photo I learnt not to rush in and snap away but rather take time to see the completed image in my mind and then proceed to work to achieve the result.
Again, many thanks from an amateur in Canberra, Australia.
Ps. I followed the link on the Nikonians site.
Ian Ross(non-registered)
Dean pointed me in the direction of his blog when answering a question on lighting I had posted on Nikonians. I was amazed by the clarity of his explanations, the creativity of his solutions and composition ,and most of all his generosity in sharing.