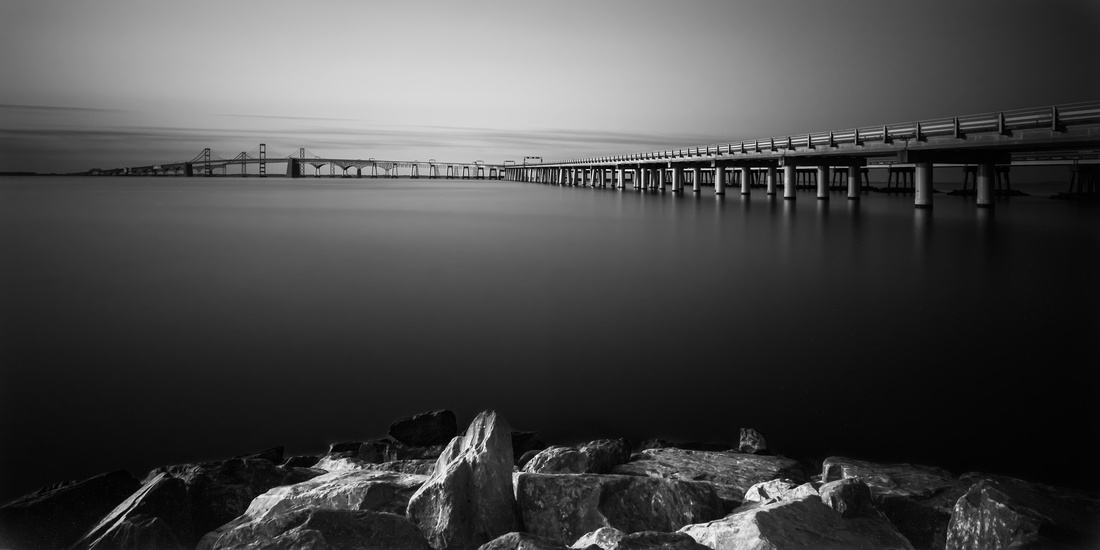 The Chesapeake Bay Bridge is one of the major dual span bridges in the United States.  It is 4.3 miles long and connects Maryland to the beautiful and rural Eastern Shore.  When the bridge opened in 1952 it was the world's longest continuous over-water steel structure, and it is still one of the longest in the world.  So how do you photograph a 4.3 mile long bridge and do it justice?  Most images you see are either details of small portions of the bridge or aerial views.  This view, taken from the end of the jetty at Sandy Point Regional Park shows nearly the entire length of the bridge, reduced to its simplest, most majestic form.  I made this 4 minute exposure shortly after sunrise.  The use of a long exposure results in a softening and smoothing of the water and sky, and it hides anything that only momentarily enters the frame - like vehicles moving across the bridge.  Combined with a high contrast black and white treatment you are left with sky, bridge, stone, and all that water.   The Chesapeake Bay Bridge.

Over the next year I'll be photographing various aspects of the Eastern Shore for an exhibition next summer and I've been looking for the shot that will open the show. I think I have found it - the Gateway to the Eastern Shore.   I'll provide more details on the exhibit as the date gets nearer.